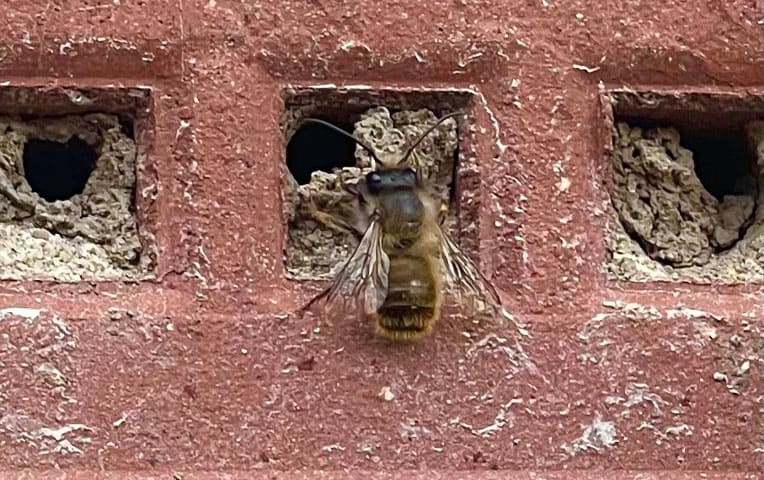 It is important to be sure which bee or wasp is in the vents because then you will know if you need wasp pest control or bee control or not. It can be hard for people to tell what is the difference between wasps and bees, though a good starting point is the fact that wasps have no hair on their  bodies and bees do have hair somewhere on their body.

The bee at the vent in the picture is a type of Masonry Bee.

Masonry Bees are seen most in April and May, especially on sunny days and on sunny walls and roofs. At this time of year we get a lot of calls from customers who need wasp control in Peth & Kinross and Fife because they are worried that they need to get rid of a wasp nest in the vent or at the eaves or on the roof when, in fact, it is just groups of Masonry Bees flying around. By June though the Masonry Bees are not seen a lot on houses.

Masonry Bees do not need bee control because they are harmless and do not sting. They do not make a nest together. Instead, each single bee looks for a crack or a hole to lay some eggs in, packs in pollen and nectar and then seals the hole over with mud, leaving the bee eggs by themselves to hatch out to new bees in the summer. You can see the vent in the picture has mud in the vent holes from the Masonry Bees doing this.

If you think you need wasp control or bee control then look closely to see if it is a wasp or bee: here are pictures that can help you. Or contact us for wasp control and wasp elimination, advice on bees and rehoming bumble bees and identification of wasps and bees.