Which yellowy coloured, buzzing insects are bothering you? Ccould they hurt or are they harmless? Sometimes it’s difficult to tell the difference bees, wasps and their mimics, especially from a distance. Do NOT get too close though – you could end up getting stung!. And then you have to decide if you need to do anything about it – and what to do.

If in doubt, ring or email us for professional pest control advice on how to get rid of pest wasps and bees.

And we’re available 7 days a week for advice and help. We really do know what we’re doing; you can trust us to get it right. There’s more information below as well to help you identify pest problems.

Identifying Pest Wasps
Pest wasps are 1-2cm long, bright yellow with dark markings, have a narrow ‘wasp waist’, build papery wasp nests with hundreds of wasps, are aggressive and will sting you repeatedly if you touch them.

Common and German Wasps are the usual pest wasps needing wasp control in Perth and Kinross, Angus and Fife. Sometimes we find smaller Tree Wasps, and Norwegian Wasps are dominant in northern Scotland. Saxon and Median Wasps are rare and found down south. Giant Wood Wasps in Scotland look terrifying but are absolutely harmless! They’re 5cm long, have a long tube at the rear, shiny black behind the head and bright orange/yellow and black bands on the body and legs. They lay eggs singly in freshly felled wood and adult wasps emerge 3 years later. They’re often found coming from wood in newly built houses; we’ve seen these wasp problems in Kinross on a new housing estate.

Hornets are like a big wasps; yellow and brown, 2-3.5cm long and sting aggressively. They like forests and open countryside and need wasp control in Aberfeldy and Pitlochry where the hills and woods provide lots of places to live, but we’ve used our wasp control in Perth & Kinross, Angus and Fife for hornets. Solitary Wasps are bigger than normal wasps, less aggressive and don’t live in hundreds in a wasp nest; one wasp makes a burrow in the ground, lays one egg in it and this produces another adult wasp. One of our customers gets these pest wasps in Crieff each summer; about 20 occupy the same earth banking.

The Asian Hornet; entered the UK in 2016. It is 2.5 to 3cm long, with a dark brown or black velvety body, yellow tipped legs and makes nests in trees and buildings. It hunts honey bees aggressively. Do not disturb an active nest. If you suspect you have found an Asian Hornet you should send a photo to alertnonnative@ceh.ac.uk

Hover Flies that look like pest wasps
These have bands of black and yellow/orange to mimic wasps so they don’t eaten by birds; but, they don’t have a ‘wasp waist’ or a sting and don’t make wasp nests. They hover and dart around in the air and gather in warm, sunny spots, like conservatories and porches; this is when they’re mistaken for wasps at a wasps’ nest. We had a call for emergency wasp nest eradication in Perth last summer from a panic struck customer but it turned out to be a cloud of these harmless little biddies.

Identifying Bees
Bees come in many sizes and types and are hairier than wasps but are mistaken for them because of their colours; shades of yellow, russets and brown with dark markings. Bees aren’t aggressive either and can’t sting more than once. Some bees don’t even sting, but sometimes you might need bee control.

Honey Bees are hairy, dark brown/pale orange with dark bands, and make wax honeycombs. Bumble Bees are big, furry and have bright yellow, orange or white tail tips. Both have nests with lots of bees in holes in trees, in the ground and under cover. Neither are aggressive but if you interfere with their bee nest they’ll sting you to defend it. Masonry Bees are brown/orange, aren’t aggressive, don’t sting, and return to the same places each year to live in holes on the outside of buildings and in soft plaster. Quite a lot can be seen together on walls and roofs and so they’re often mistaken for wasps; it’s difficult to spot the difference from the ground. One of our customers thought they needed wasp control in Auchterarder last year but it was just masonry bees on a sandstone wall; they were busy from April to June but weren’t a nuisance at all the rest of the summer. Solitary Bees have individual nests in sandy ground; if several do this close together it can be mistaken for a wasp nest; we had a call for wasp control in Coupar Angus but it turned out to be these harmless bees and they’d moved on by mid-summer.

If you have have a bee problem, see our bee control page for more information.

Bee Swarms
A swarm is when bees fly away from a nest to create a new one. They settle in a large cluster whilst ‘scouts’ look for a new place to live; this is sometimes mistaken for a wasp nest. Swarms move on within a day normally, they don’t stay permanently. We get calls about these potential wasp nest problems in Abernethy and Auchtermuchty and other lower lying places in May, and get the same reports of apparent wasp nest problems in Pitlochry and Crieff and hillier areas a bit later on in June. 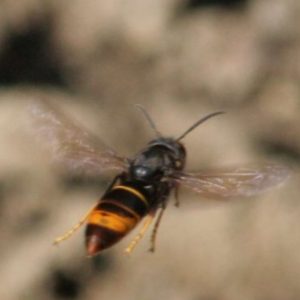 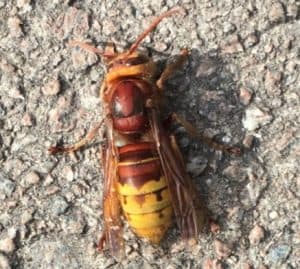 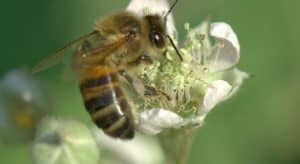 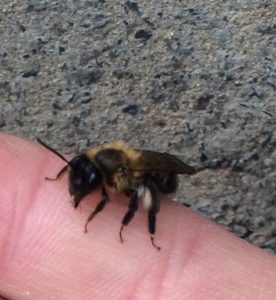 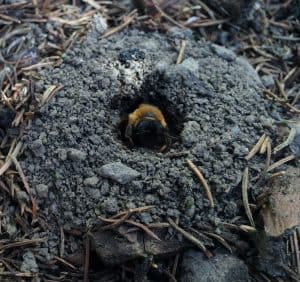 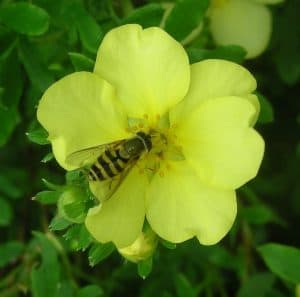 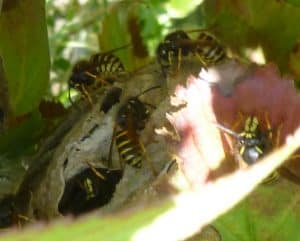 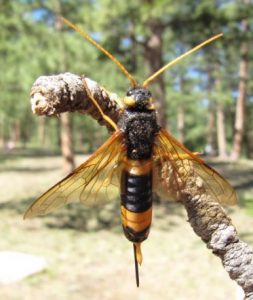 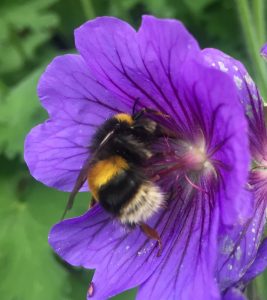 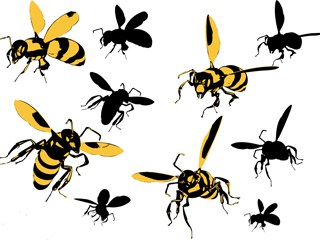