We’re happy to deal with small and large scale problems. We use ant control preparations available only for professional use and are experienced in the full range of pest ant control methods. We carry out ant control safely too, so food, children, pets and wildlife aren’t harmed.

And we’ve got the experience to deal with a range of ant problems; from industrial units and food businesses to front porches and kitchens of houses.

Don’t let the ant problem get out of hand because it could become an ant infestation; unpleasant, unhealthy and especially bad for businesses and food premises. The ants could produce a swarm of flying ants inside too.

If in doubt, ring or email us for professional pest control advice on how to control ant infestations and how to get rid of ants.

We’ve 30 years’ experience in pest control and provide free pest control surveys. And we’re available 7 days a week for advice and help. We really do know what we’re doing; you can trust us to get it right.

There’s more information below on pest ants and our ant control service.

Types of pest ant
The Black Ant or Garden Ant is found indoors and outdoors in the UK. The Pharaoh’s Ant, Ghost Ant and Argentine Ant are found only inside heated buildings. They are a nuisance, a health hazard and live in nests that are often inaccessible. Very rare ants indoors are the Crazy Ant, Roger’s Ant and Big-headed Ant.

Ant infestations
The Black Ant or Garden Ant is the commonest pest ant in Scotland, living in soil, under stones, in foundations and walls and under floors; they get into rooms through the smallest gaps. Ant nests live for years so pest ants can be a persistent problem and need repeated ant control. The worker ants search for food, especially sweet food, and alert other ants when they find it; hundreds form an ant trail, running between the food and the nest. This is what they’re doing when you find them in your house, business premises or on your patio; it’s amazing what bits of food they can find. They’re a nuisance, there’s the risk of contamination of surfaces, food and drink with anything they’ve picked up on their bodies and they can end up in the food too.

Pest ant activity is influenced by the temperature and weather; the warmer it is, the greater the ant activity. Ants cause problems outside mostly from spring onwards; we used ant control in Perth in March this year for ants around a front door and in a porch. The ant problems outside will continue through to autumn; we’ve had calls in September for ant control in Pitlochry for an ant infestation on a patio. If the ants are living inside around heating systems, stoves and fireplaces then it is warm enough for them to cause problems inside all year round; over the winter we used ant control in Coupar Angus in a bathroom. It’s common to find this problem in large, heated buildings like hotels and hospitals.

Poor hygiene causes infestations; ants will find bits of food left lying around, especially sweet things. A discarded lollipop stuck behind a tanning parlour cubicle caused an infestation for ant control in Perth. Food and drink spills that build up in hard to clean places in restaurants attract ants too; we used ant control in Cupar to get rid of a repeated ant infestation in a hotel kitchen.

Flying Ants are the sexually mature forms of the Garden Ant, normally seen in warm, humid or thundery weather in July and August. Large female and small male ants fly from the nests at the same time and create a swarm to mate in; its size and frenzied activity are very alarming, especially inside. We made an emergency call for flying ant control in Kinross one weekend last summer where a terrified customer had an ant swarm in her house, followed by another for ant control in Crieff for exactly the same problem.

Pharaoh’s Ant, Ghost Ant, Argentine Ant are tropical species, living in heated buildings in the UK like hospitals and housing blocks. They have multiple nests and create widespread ant infestations. Pharoah’s Ant is attracted to infected wounds, spreading disease and contamination. They’re small and get into packaging, including sterile hospital packs, are spread around in bedding, luggage and potted plants; they need thorough surveys and control.

Food Businesses and ant control
Ants are a risk to Food businesses because of laws such as The Food Hygiene Regulations and The Food Safety Act. These say that food and drink must be fit for human consumption and not contaminated by ants; also that ants must be kept out of the premises in the first place. Breaking the law can mean heavy fines, lost reputation and closure. It’s best to have ant control under a professional pest control contract to satisfy the law, Environmental Health and Auditors. Contract prevention and control of ants is very cost-effective and efficient too, far better than waiting until there’s an infestation. Contract pest control for ants is suitable for small take-aways through to large hotels; we provide food businesses with contract pest control in Perth and other towns and cities in the area.

Ant pest control methods
We use a variety of preparations for ant pest control: sprays, dusts, gels and air treatments; some are insecticides, some insecticide-free and  some are organic for natural ant control. Our professional treatments control ant infestations and flying ants effectively. 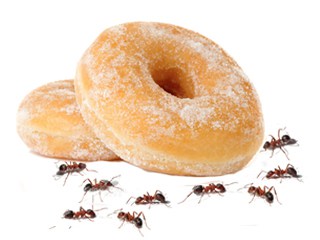