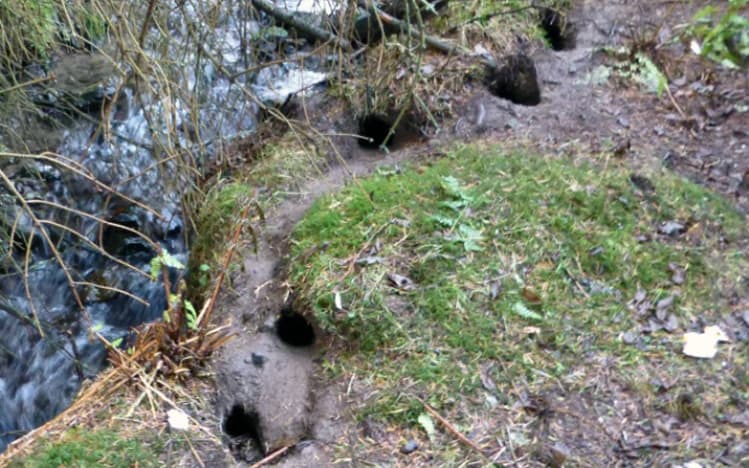 We have used rat pest control a lot this winter and dealt with a lot more rat infestations than normal. Many times the customer doesn’t know that they have rats, only noticing the rat problem when the rat infestation really gets out of hand. Once it reaches this level then the rats can have caused a lot of damage and contamination and become very well-established, needing several visits to get rid of rats.

Rats are pretty easy to spot when a rat infestation is fully established and the rats are sitting underneath the bird feeder in broad daylight! However, rats are quite shy and sly, move around mainly at night and like to hide under cover, so they aren’t the easiest vermin to see in the early stages of a rat infestation.

So how do you know if you have rats and what signs of rats should you look for?

Rats will often burrow in the ground, making holes 10 cm wide or bigger, and you’ll maybe see rat burrows in flowerbeds, bankings and at the bases of house walls, buildings and decking. We used rat control in Perth to get rid of the rat burrows in the picture. There will normally be rat-runs, which are paths worn down in the ground by rats following the same routes every day as they roam about outside: you can see these on both bare earth and grass. Rat droppings – about 1cm long, dark and cylindrical – could be tucked away in corners of sheds, under stored items or just scattered on the ground. Damage caused by rats chewing is often seen: holes in doors, burst bales of straw and silage, damaged bags of bird food and stored items.

Signs of rats can be found inside buildings too. Last week we used rat control in Dundee for rats that were responsible for bananas disappearing from a kitchen overnight and a 30cm wide hole chewed through plasterboard in a utility room needed rat control in Kinross. Loud noises in the walls and attic, especially after dark, are another sign of rats in the house. Rats cause bad smells too. They pass a lot of urine, which is a bit whiffy, and you can smell it easily in confined spaces, such as the cellar where we got rid of rats in Pitlochry. And the smell of a dead rat is extremely unpleasant and pungent: a shop needed rat pest control and rat removal in Dunfermline to stop[ this awful smell and to keep the shop open.

If you think you have a rat problem then contact us for advice and professional rat pest control to remove rats.